I go back and forth on whether the topic of virtue is worth a public airing. After all, much of it is obvious, it’s not new in and of itself, and it’s too easy to slip into glib, preachy generalizations. Like everything else, there are cultural differences in what is considered worthwhile in the public sphere. Japan, for example, has a high tolerance for pushing virtue. You can see it in the small details. For example, it’s common to see traffic signs with sincere admonitions to show courtesy to other drivers or to keep the roads clean. The equivalent signage in the United States has to appeal instead to humor or threats: “Litter and it will hurt: $316 fine.” In a style of karate I used to practice, every class would end with a recitation of dojo principles. The first one was “Seek perfection of character.” That wouldn’t happen in a boxing studio.

In India, virtues come up in discussions of spirituality. Newspapers with broad readership have daily columns dedicated to it [for example, see right], and the writers, regardless of their faith, draw from a variety of traditions to make their point: Hindu, Buddhist, Christian, Muslim, Sikh, or secular humanist. People also readily engage in the topic. Here, for example, is the opening line of a real email that I once received from a man with a degree in electrical engineering from one of the world-renowned Indian Institutes of Technology. It was sent out to a mailing list of people interested in environmental issues:

Buddha, one day, was in deep thought about worldly activities and the ways of instilling goodness in human beings.

If you’re anything like me, you suppressed a chuckle when you read this, or maybe you didn’t even bother to suppress. I certainly chortled. Goodness in human beings?! Was he for real?

It’s not clear, though, why this elicits a laugh. Don’t we want goodness in human beings? Yet, something about the sheer earnestness collides with what must be an entrenched cynicism.

I can think of at least three kinds of cynicism that apply. First, there’s what might be called biological cynicism — a belief that human nature is fixed or sufficiently difficult to change that the effort isn’t worthwhile. We can manipulate people’s behaviors, but we can’t expect people to change intrinsically.

Biological cynicism is built into influential models of policy. For example, classical economics models people as selfish, rational agents and stresses the importance of incentives like money. Behavioral economics has cast doubt on the rational-agent model, and economists readily concede that money isn’t the only incentive — people are said to have different preferences — yet when policy-makers get down to business, money is the ultimate metric and often the favored instrument.

For most people, though, money is neither the only concern nor the primary concern. The best evidence for this is economists themselves: Here are a set of smart people who are the world’s experts on money. If economists were exemplars of their own models, there shouldn’t be economists off of Wall Street.

Of course, it’s not just economists. People can and do change.

Second, there’s a secular cynicism, the repulsion that some people have for anything that smells of religion. Virtue reeks of it. If you have a disinclination for organized religion, it doesn’t help that churchgoers embrace a rhetoric of virtues or that lists of virtues often include traits like chastity.

Still, virtues can have value independent of a religious framework. A consequentialist definition specifically avoids any: virtues can be defined as character traits that lead to good consequences. God need not be involved, and virtues can be updated for the times. Instead of temperance, charity, and prudence, there’s self-control, compassion, and wisdom. Real virtues have a place regardless of faith.

Third, there’s intellectual cynicism. Intellectual cynicism is hard to pinpoint, but I think it’s related to the high-school desire to be cool rather than good. The essence of cool is rebellion and subversion, and it’s difficult to be either through goodness. No one wants to be a Goody Two-Shoes.

Intellectual cynicism might be the most destructive of the three forms of cynicism, because it doesn’t so much deny virtue or its possibility as much as to mock it. And mockery is a powerful social force. It’s probably why in spite of myself, I laughed at the email about instilling goodness, and why writing this post involved a cycle of cringing and revising.

Cynicism feeds itself. If we don’t think greater virtue can be fostered, then we won’t try, and if we don’t try, the cynical side of us will be proven right. Is it worth trying to pick ourselves up out of the cynicism?

America’s founding fathers were brilliant realists by all accounts, but they weren’t cynical, and they didn’t mock virtue. For example, in arguing for the ratification of the U.S. Constitution, James Madison said, “Is there no virtue among us? If there be not, we are in a wretched situation. No theoretical checks–no form of government can render us secure. To suppose that any form of government will secure liberty or happiness without any virtue in the people, is a chimerical idea.” (Recall Confucius?) Benjamin Franklin lists thirteen virtues in his autobiography and goes on to describe a weekly report card of virtues he made to keep tabs on his progress [at left]. Nothing could be nerdier!

Of course, we live in a different world with a different style. When I talk about the importance of human intent and capacity to people interested in technology and development, I’m often asked, “I believe your thesis, but what can we do about it, if technology isn’t the solution?” In the next post, I’ll suggest a few possibilities. 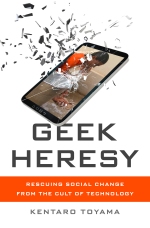